Link to this page

The Course of the Empire: The Consummation
Order a Hand-Painted Reproduction of this Painting 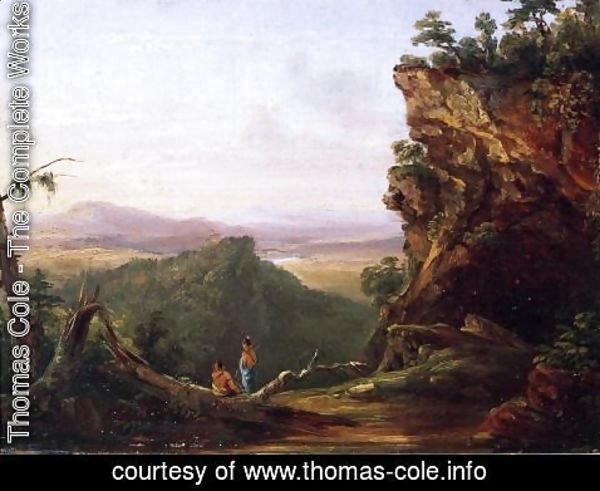 Thomas Cole America's leading landscape painter during the first half of the nineteenth century, was born on February 1, 1801 in Bolton -le-Moor, England. Before emigrating with his family to the United States in 1818, he served as an engraver's assistant and as an apprentice to a designer of calico prints. Cole worked briefly as an engraver in Philadelphia before joining his family in Steubenville, Ohio, in 1819. While in Ohio he apparently learned the rudiments of oil painting from an itinerant portrait painter named Stein. In 1823, during a stay in Pittsburgh, Cole began drawing from nature, creating closely observed and intensely expressive images of trees and branches. Later that year he returned to Philadelphia, where he studied at the Pennsylvania Academy of the Fine Arts and worked in a variety of art-related jobs.

In April 1825 Cole moved to New York, where his family had also relocated. That summer he made an extensive sketching tour up the Hudson River and into the Catskill Mountains. In late October 1825 three of his landscapes were sold to three prominent figures in the young nation's art community, John Trumbull (1756-1843), William Dunlap (1766-1839), and Asher B. Durand (1796-1886). In January 1826 Cole was elected a founding member of the National Academy of Design, and his works were increasingly in demand with leading patrons such as Daniel Wadsworth (1771-1848) of Hartford and Robert Gilmor, Jr. (1774-1848) of Baltimore.

Although Cole had ample commissions in the late 1820s to paint pictures of American scenery, his ambition was to create a "higher style of landscape" that could express moral or religious meanings. His first major efforts in this vein met with mixed reviews, and he decided study and travel in Europe were necessary. In June 1829 Cole sailed for England, where he studied the works of Old Masters and also met Joseph Mallord William Turner (1775-1851) and John Constable (1776-1837). He subsequently traveled in France and in Italy, with lengthy stays in Rome and Florence. While in Italy he conceived of a multi-part landscape series tracing the rise and fall of an archetypal civilization. Although he failed to interest Gilmor in commissioning the series, upon his return to America in 1832 Cole did manage to convince the retired New York merchant Luman Reed (1785-1836) to support his grand project. The result, the five canvas Course of Empire (New-York Historical Society), was completed in 1836 and received considerable popular attention and generally favorable reviews.

Cole continued to paint American landscapes in the 1830s and early 1840s, but much of his energy in these years went into the creation of complex imaginary works such as Departure and Return (1837, Corcoran Gallery of Art, Washington, D.C.) and the two versions of The Voyage of Life (1839-1840, Munson-Williams-Proctor Institute, Utica, and 1842, National Gallery of Art, Washington, D.C.). In 1836 he married Maria Barstow and settled in Catskill, New York, a small village on the west side of the Hudson and close to the Catskill Mountains. That same year Cole, who was throughout his career a prolific writer of prose and poetry, published his "Essay on American Scenery" in the American Monthly Magazine, in which he expressed many of his most deeply felt convictions about landscape painting.

In 1841 Cole make a second trip abroad, with extensive travel in Italy, including a memorable visit to Sicily that resulted in several views of Mt. Etna. He returned to Catskill in 1842; in 1844 he accepted the young Frederic Edwin Church as a pupil on Daniel Wadsworth's recommendation. In the mid and late 1840s Cole painted many impressive American landscapes, which are notable for an increased accuracy in the depiction of atmosphere and light. At the same time he labored, ultimately without success, to complete a five-part series called The Cross and the World, in which he endeavored to portray the individual's quest for spiritual knowledge and salvation.

Cole's premature death in Catskill on February 11, 1848, was universally mourned and a comprehensive memorial exhibition of his works was quickly organized in New York. His influence on the course of American landscape painting was profound and his works influenced numerous younger painters who matured in the late 1840s and early 1850s, most notably Jasper F. Cropsey and Church. [This is an edited version of the artist's biography published, or to be published, in the NGA Systematic Catalogue]

Report an error on this page